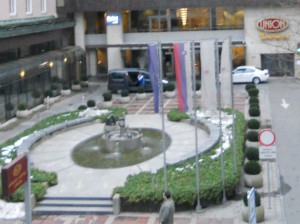 After seven hours of smelling and sipping, observing and tasting, the second Sparkling Wine Festival, held in Ljubljana on february the 13th, is over.

This festival was a successful event for all parts – organisers, exhibitors and visitors – and it’s easy to foresee there will be a third edition.

Organisers can be satisfied because a lot of visitors came at the Grand Hotel Union to taste sparkling wines by more or less thirty winemakers, coming from Slovenia (most of them) and from abroad.
Another reason why organisers can raise their glasses is that visitors enjoyed the fair and looked very satisfied, both because the location allowed to taste wines in relative tranquility and because of the quality of wines producers presented, which was pretty high in average.

Exhibitors could take advantage of a high number of engaged visitors, most of them carefully tasting sparkling wines and asking for information on the cellar, mainly where was it based and whether it was possible to visit it.
Organisers provided each table with buckets and water to clean glasses, as well as a small basket of breadsticks to sooth stomaches; staff members provided the tables with clean buckets and full baskets promptly, when needed, so that each stand was constantly fully equipped and exhibitors didn’t have to care about anything but serving and describing their wines.

Visitors had the opportunity to taste and compare different sparkling wines, enjoying the differences given by terroir, climate and, obviously, grapes. As those who already visited Slovenia know, Slovene are warm, so the visitors felt cuddled while they were served wines and told about production method.

An interesting feature of this fair was that it was possible to purchase single bottles of wines from different producers, this sparing the visitors a further travel to the cellars (which could be appreciated with particular regard to French winemakers).

An outstanding menu of food tastes was also available in a near hall, to allow visitors taste how sparkling wines “reacted” on papillas when drunk alone or matching with different flavours. 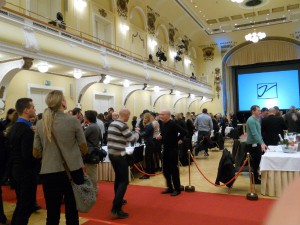 A good number of visitors joined the festival just from its opening, and it increased as time went by.
Although it became more and more difficult to move between the rows of tables as the number of visitors increased, the atmosphere was, on the whole, calm, even thank to live music played by an acoustic trio on stage.

Unlike at some other wine festivals (with special reference to those we attended in Italy), visitors were more careful and polite, as they noticeably were there to taste and compare wines, to discover new sparkling wine producers and to chose which to bring home, instead of drinking as much as possible for the entry fee.
This doesn’t mean there weren’t short moments of confusion; funnily, the most noisemaker crowd in the hall seemed to gather at a distributor’s table, Lokatrade, probably because he offered French and italian wines. By the way, it was sufficient to keep clear of that stand to enjoy the generally relaxed climate of the fair.

A more expert-looking audience went around the tables of some Slovene winemakers, such as Emeran Reya, Colja and Semiška Penina, as well as around the one of a young French winemaker, coming from a long-tradition of Champagne production: family Allouchery-Perseval.

In conclusion, the Sparkling Wine Festival organised by Radomir Stojanovič s.p. is definitely become a quality, unmissable date for those who are willing to deepen their understanding of Slovene (and not only) sparkling wines, in an environment that encourages learning and building relationships.